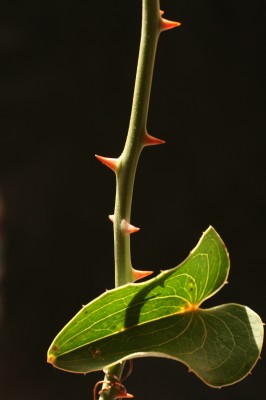 21. Chiliadenus iphionoides – a typical rock plant; the vegetation class of the rocks in Israel is named after this plant
22. Majorana syriaca grows as a rock plant on a Nari rock
23. A Chiliadenus iphionoides stand (1) with first individuals of Micromeria fruticosa (2)
24. Micromeria fruticosa – confined to rocks in the Mediterranean part of Israel
25. Stachys palaestina – a typical rock plant in the Mediterranean part of Israel
26. Teucrium capitatum in a crevice or soil pocket on the right and a small soil pocket supporting Valantia hispida and Catapodium rigidum (both are annuals)
27. A soil pocket first populated by Chiliadenus iphionoides is seen here supporting a seedling of the shrub Rhamnus lycioides

29. A rock with three Rhamnus lycioides individuals and small soil pockets with annuals

31. Rhamnus lycioides and Pistacia palaestina sharing a wide crevice which they make wider through the thickening of their lignified roots

32. Pistacia lentiscus on a Nari rock that underwent biogenic weathering as explained above. The rock was continuous until broken by shrub roots and filled with soil

33. Pistacia lentiscus on a Nari rock that became fragmented by the expanding lignified root

35. Pistacia palaestina as a tree at the base of a slope facing north-west covered with Nari. The sharp boundary of vegetation is clearly seen at the Nari rock margins