More on snails and lithobiont relationships 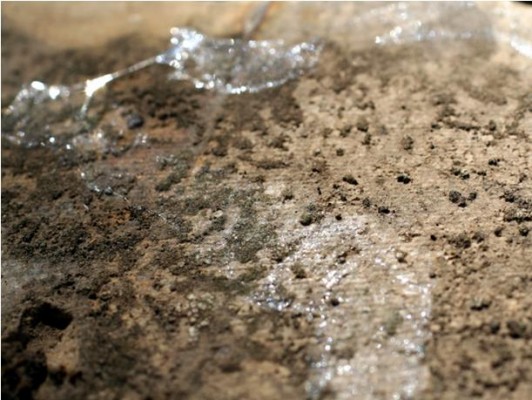 Fig. 6.9.1: The top of a fence-wall where snails or slugs were moving last night, and the mucilage left by them has dried and become its "road-map" of shining lines.

There is some similarity in the rhythm of life activity of snails living among rocks and that of lithobionts. Both groups of organisms are drought-dormant most of the year and when rain falls they resume physiologic activity. The lithobionts' bodies swell when wetted and if they are endolithic, the rock containing them becomes softer. The snail extends its "foot", with which it crawls on the rock, and covers the path with mucus. When the snails arrive at a lithobiont that does not have snail-repellant chemicals (which are assumed to have developed during long parallel evolution of snails and lithobionts), they scratch them and eat. If the lithobiont contains sand or dust grains, or if the snails graze a bit of the rock together with the lithobiont, the snails excrete it as brown or whitish cylindrical bodies.

The mucus that assisted the snails or slugs in crawling, dries out and remains for a short time as thin, sparkling strips on the rock or stone (Fig. 6.9.1). I particularly love those slugs that come in the fall days, before the first rain, when the Urginea and Pancratium bloom. They leave their hiding places in my garden and climb the wall of our house. During the moist hours of the night they graze on the lithobionts that develop on the horizontal part of the wall (Fig. 6.1.4), leaving typical grazing marks and shining strips of dry mucus. Sometimes they can be seen there, crawling slowly. It is a great pleasure to hear my grandchildren telling their parents about the slugs and their night activity when they visit their grandmother and grandfather in Jerusalem.

Snail or slug activity is often seen on rocky surfaces where the lithobionts are rich in dark pigments (Fig. 6.9.2). Grazing of the organism with the supporting rock is revealed by a winding line composed of light-colored triangles. When the dry rock (upper half of Fig. 6.9.2) is wetted, the organisms absorb water, become darker and the contrast with the rock increases. A nice memory from a short excursion to Nahal Ze’elim, at the Judean Desert is shown in Fig. 6.9.3. Light rain was drizzling all day and started to flow on loose rocks at the bottom of the canyon. In these sites cyanobacteria or cyanophilous lichens grow and when wetted they immediately turn darker, and here they had already marked black strips on the rocks. When we came closer to the rocks, we saw the immediate reaction to this wetting: the snails, who got their chance of feeding for an unknown period, were already crawling on the black background (Fig. 6.9.4). I believe that the snails who did not "realize" the critical importance of the time when lichens are wet and ready to be eaten, have already disappeared during the evolutionary history of the area. 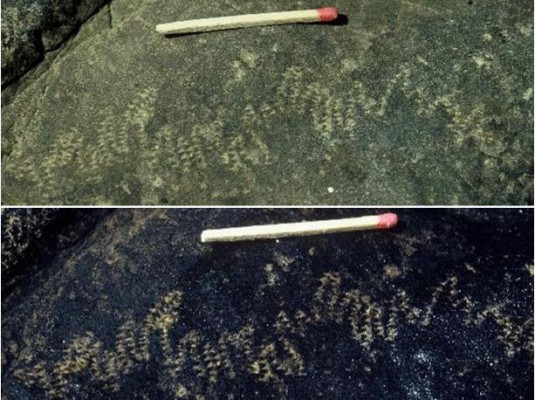 Fig. 6.9.2: A limestone rock from the Galilee covered with cyanobacteria and cyanophilous lichens. Grazed by a snail or a slug that left a winding line composed of small triangles where microorganisms have been removed. Dry state above; lower photo – a few minutes after wetting, where the imbibing microorganisms start their physiological activity and become black. 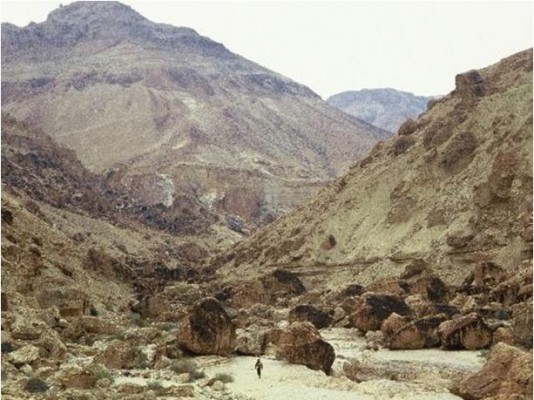 Fig. 6.9.3: An extreme desert area at the Nahal Ze’elim canyon, in the Judean Desert. The rain falling during the photographing has led to the swelling of cyanophilous lichens and blackening of the rocks. Snail activity starts immediately. 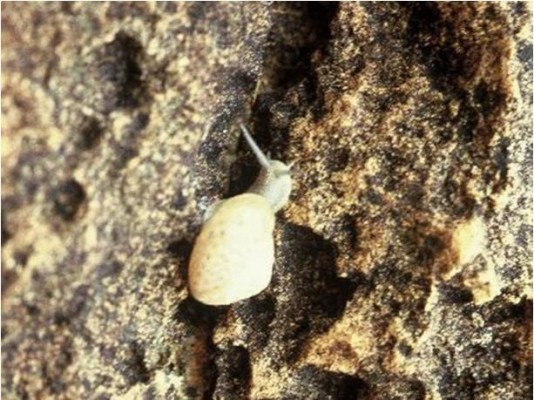 Fig. 6.9.4: A snail that came out of a fissure in the rock (in Fig. 6.9.3), where it hides from drought until rain falls. During the short time available to it, the snail has to eat large quantities of lichens.

On an excursion to Mt. Gilboa I saw first this weathering pattern (Figs. 6.9.5, 6.9.8, 6.9.9, and 6.9.10). There were places where the holes were superficial, as in Fig. 6.9.4, but there were other places in which the hole where I found a living snail was at the end of a long cylindrical hole or tunnel. I thought of doing an experiment; Sarah – a colleague, went to visit her family at the foot of Mt. Gilboa, and I asked her to bring me a few live snails (it was Levantina caesareana). After receiving the snails I put them in a plastic container and covered it with a piece of polished limestone often used for worktops in kitchens. It was summer and I did not expect much activity. One month after putting the snails in the container we were told by the university authorities that the contents of our offices had to be packed up – we were moving to another location while renovations were carried out.

While packing, I removed the polished limestone from the container and saw that all the snails I had put on the container floor had became attached to the limestone. One of the snails fell down and the place where it was attached became obvious (Fig. 6.9.6). The contact point is "heart-shaped" and in site "1" (Fig. 6.9.6) the polished layer does not exist; the limestone is not shining (compare to "2"). I exposed an additional two such contact points by removing the snails and there was a similar non-shining patch. The conclusion is that while the snail is attached to the hard limestone it dissolves the rock, absorbs the solution and transfers it to its shell. Hence, the snail causes the polished-shining layer to disappear and starts to "drill" a hole in the rock. 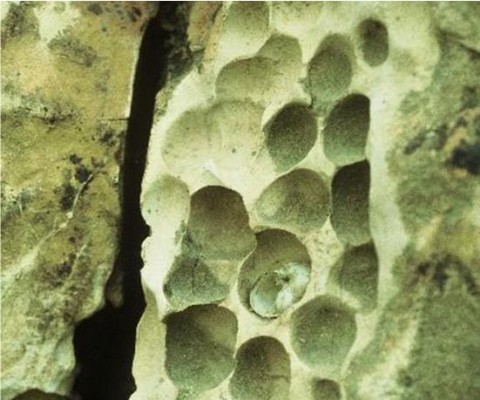 Fig. 6.9.5: Weathering pattern resembling a huge honey-comb. The holes in the rock were dissolved by snails of the genus Levantina that became attached to the hard rock in a wide enough fissure. 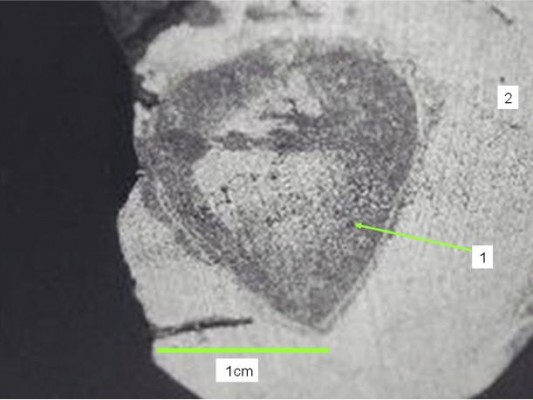 Fig. 6.9.6: A section of a polished crystallized limestone block that was used to seal a box with active snails (Levantina caesareana) collected at Mt. Gilboa. One of them left a heart-shaped spot where it became attached to the polished rocks. The "marking" was done by limestone dissolution and absorption by the snail. "1". A patch of limestone dissolution by a snail. "2". Polished limestone.

Visiting Nahal Oren on Mt. Carmel, I got a few free lessons in the formation process of the honeycomb weathering pattern. The snail population has several crevices and holes in the rocky terrain in which the snails hide between the rain showers (Fig. 6.9.7). They stay there attached by their "foot" and protected from dehydration by the hard rock, due to the low water holding capacity of the limestone. When it rains the snails resume activity and leave their hiding place to eat lichens and other lithobionts. Each time, some of the snails do not return to their place, consequently 5-7 grams of the limestone dissolved from their specific place in the rock disappears. Nature takes a long time to "do things" and during dozens and hundreds of years a hole, and later a tunnel, is formed by generations of snails. 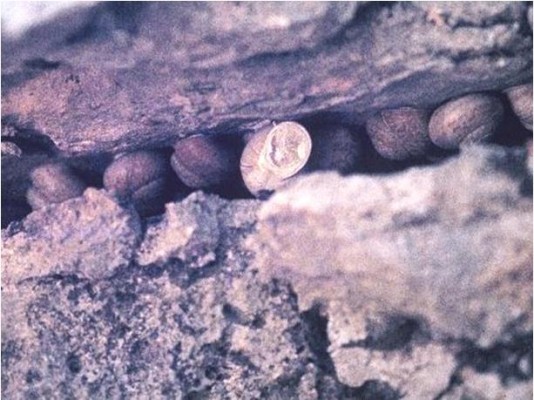 Fig. 6.9.7: A fissure in a rock on Mt. Carmel. The Levantina snails are densely positioned with their "foot" tightly attached to the rock. Here, they dissolve the rock and absorb the solution. They build their shell with this Calcium carbonate solution. Generation after generation makes the holes deeper and deeper.

There were places in Mt. Carmel where the snails created small caves (Fig. 6.9.7). The ceiling of the cave has large holes populated by snails living there ("1" in Fig. 6.9.8), and the excrement of the snails accumulates on the floor. With time, this becomes a kind of humus ("2" in Fig. 6.9.8) which probably accelerates local rock dissolution. The lichens ("3") on the rock, just above the cave, become grazed by snails whenever it rains. When inserting one's finger into the holes in the ceiling, dissolved by snails over hundreds of years, one may touch a living snail hidden inside. It is not hard to imagine my excitement upon finding a "snail cave" near a quarry from Hasmonean times (ca. 2000 years ago), some 100-150 m south of Jaffa Gate, in the Old City of Jerusalem. There were parts of a snail shell in one of the ceiling walls of that "cave". The snail cave was part of the natural components of the landscape of Jerusalem 2000 years ago.

After the walls of Jerusalem were built, the urban garbage thrown from the town into the public area, covered the whole area including the base of the wall, the quarry and the "snail cave". Following the archaeological excavations of Dr. Magen Broshi in 1972, I discovered the "cave" and the last generation of its creators. I was even more excited to discover a similar weathering pattern in the Jerusalem wall from the days of the First Temple, which were discovered in the Jewish Quarter excavations (Fig. 6.9.9). From now on, when you see a stone that looks like a honeycomb (Fig. 6.9.10) you will know that it was once on one side of a crevice in a hard rock under conditions that were conducive to the development of Mediterranean vegetation. 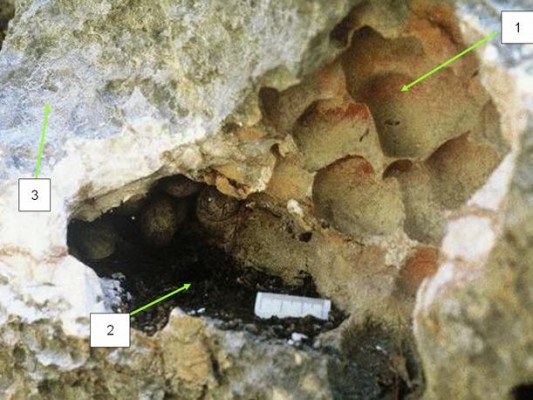 Fig. 6.9.8: A small "cave" formed in a rock through limestone dissolution by snails. CaCO3 that was absorbed into the snails' shell is removed from the system by old snails that die outside of their rock. 1. A space formed in the rock by snails. 2. Soil containing mainly snail excrement. 3. Endolithic lichens. 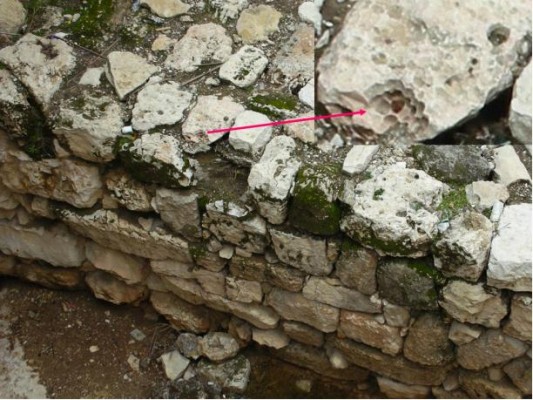 Fig. 6.9.9: The wide wall of ancient Jerusalem from the First Temple period, in the archaeological excavations of the Jewish Quarter in Old Jerusalem. The fourth stone from left to right contained a "snail cave". Snails continue to make such "caves" in present-day Jerusalem. The ancient cave indicates that a similar climate prevailed during the period when the stones of that wall were cut from rocks there. 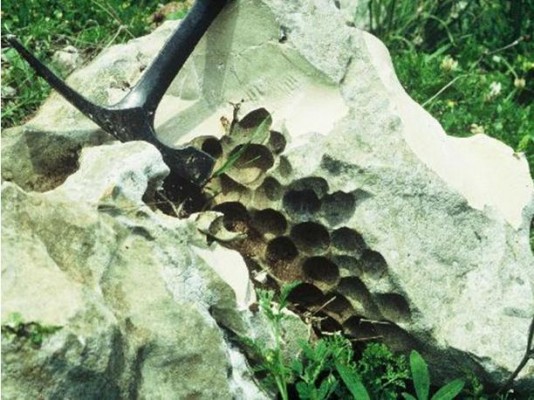 Fig. 6.9.10: A detached stone in a field at Mt. Gilboa. The weathering pattern tells us about the last chapter in its history. After reading the above chapter I hope the reader will pay attention to such stones.