Endolithic Lichens that Make Rocks Soft, in a "Labyrinth Pattern"

The pattern formed by this grazing is not fixed and we called it by a temporary name – "labyrinth pattern." In a rock surface that is grazed rarely, the fungal hyphae grows and is darkened by protective pigments when exposed to the sun; the rock becomes gray in these places. Higher places, that are grazed less frequently, become almost black. A profusion of colors typifies these "softening" lichens, which are grazed by snails and slugs (Figs. 6.7.2, 6.7.3). 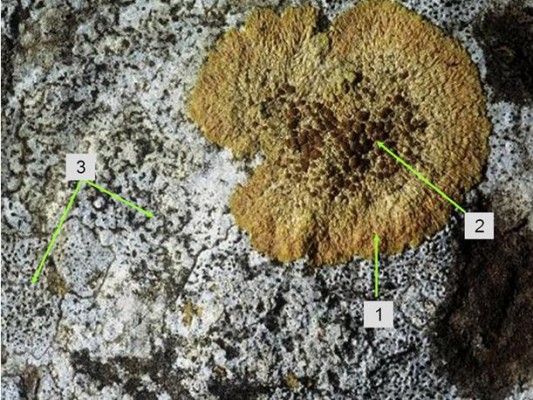 Fig. 6.7.1: Orange colored epilithic lichen ("1") with darker round fruiting bodies at the thallus center ("2"); it developed above an endolithic lichen that makes the hard rock much softer. 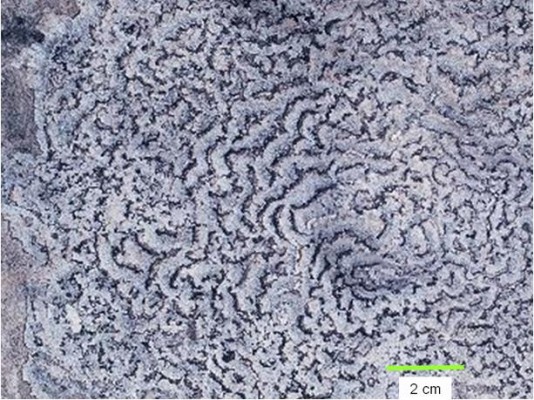 Fig. 6.7.2: Endolithic lichens that were eaten by snails at diferent times in the past. The recovery of the lichen after being grazed is displayed by the surface color. White is the rock's color; when it is gray, there are some fungi hyphae (threads) close to the surface that contain dark pigments. The round, black points are the fruiting bodies. 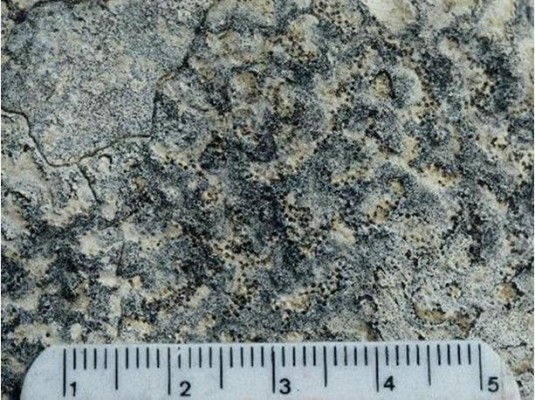 Fig. 6.7.3: Endolithic lichen has been grazed by snails and as a result displays a complicated morphology (we named it "labyrinth"). The snails pass along the same paths; black strips remain in non-grazed lines.

Most detached stones in the Negev Highlands (Fig. 6.7.4) between Dimona, Mizpe Ramon, and Mt. Ramon, typically have a gray color and a jigsaw puzzle-like pattern of weathering (Figs. 6.7.5-6.7.8). The side of the stone facing upwards (to the atmosphere), is gray. As mentioned above, the tips of the fungi hyphae and their fruiting bodies contribute minute black dots at the surface, which, when mixed with the white rock crystals appear to be gray. Stones "1" and "2" in Fig. 6.7.5 are gray whereas stone "3" is brownish, as a result of contact with the soil. We called them "the rolling stones", as one can see the typical weathering pattern on all the surfaces. The moisture regime of the stones, resulting from 200 nights of dew per year, which wet the stone efficiently, is a rather constant parameter. When an animal turns the stone over in search of food, the formerly soil-facing side becomes exposed to the atmosphere and becomes re-populated with Caloplaca alociza, the common lichen species of this habitat in the Negev. The formerly atmosphere-facing side is now facing the soil; the lichens die, their bodies disintegrate, and the holes they formed in the rock become empty and are thus revealed ("3" in Fig. 6.7.5; Fig. 6.7.6). 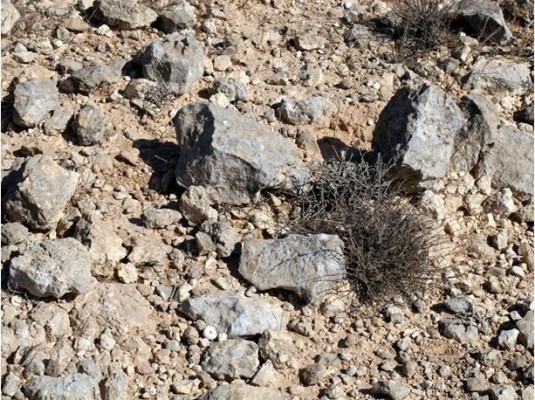 Fig. 6.7.4: The color of most stones lying on the ground is gray and most of them are populated with endolithic lichens. They benefit from about 200 nights a year when the high quantity of dew leads to the wetting of these stones. 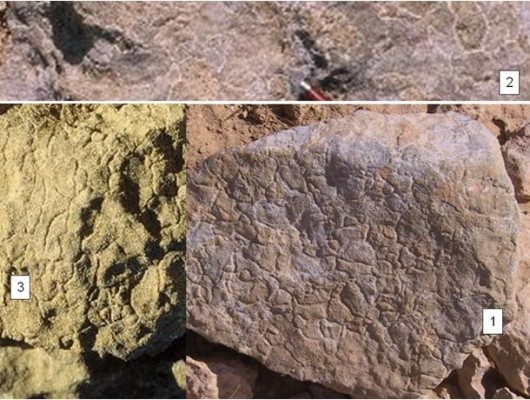 Fig. 6.7.5: Gray stones populated with endolithic lichens that have created a "jigsaw-puzzle-like" pattern on the surface. Stones "1" and "2" were exposed to the atmosphere for a long time. Stone "3" has brown patches as it faced the soil for a long time. The gray patches suggests that a few of the thalli are alive. To check vitality, the surface has to be scratched and removed, until the green algal layer is exposed. 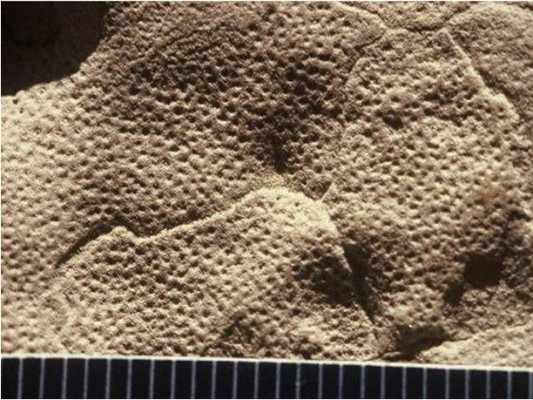 Fig. 6.7.6: The lower, ground-facing side of a "rolling stone". As a result of long contact with the soil and lack of solar radiation, the lichens died and their organic matter decomposed. The small rounded depressions are the places where fruiting-bodies of the lichens were located; the minute channels are the meeting places of thalli of neighboring lichen individuals.

Another interesting phenomenon, which may be seen in many mountain ranges in the Negev Highlands, is the microclimatic changes evidenced by the biogenic weathering patterns (Fig. 6.7.7). The two most significant climatic parameters for microorganisms' survival are the mean annual rainfall (which is 100 mm) and the number of nights with effective dew (200 nights per year). The rock warms-up slowly during the day and cools down slowly at night, thus, in the cool hours of the night, when dew is deposited on cool objects, the warm rock outcrops prevents the deposit of dew on them. On the other hand, the detached stones warm up faster during the day and cool down faster at night. They are cooler than their environment and on moist nights encourage the deposit of dew drops on their surface. In conclusion, the detached stones are wetted by rain showers and by heavy dew that is sufficient for some 2 hours of photosynthesis. The intact rocks are wetted only by rainfall and hence have to be populated by more drought-resistant organisms. In its past, stone "2" in Fig. 6.7.7 was part of a rock on which Lichenothelia fungi lived on the upper surfaces and a community of cyanobacteria and cyanophilous lichens caused pits and lived in the spongy areas that they caused. After stone "2" became detached from a rock, as displayed in Fig. 6.7.7-"1", soil penetrated the fissure. This soil caused isolation of the stone from the entire rock and the stone started to follow the thermal- and thus the moisture regime of a detached stone. Detached stones in this climate are populated by gray colored endolithic lichens with a jigsaw puzzle-like pattern. The latter pattern covers the nano-topography of the pitted rock but still displays the pits and channels. 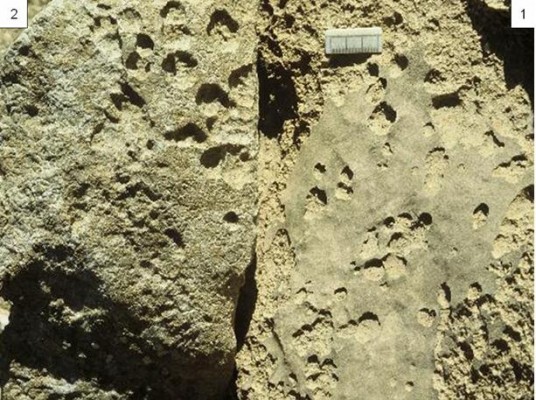 Fig. 6.7.7: The source of these rocks is a south-facing slope near Sede Boqer. Rock "1" is wetted only by rain showers; no dew accumulates on such rock. It is weathered into pits with a spongy floor and populated by cyanobacteria and cyanophilous lichens. Lichenothelia fungi develop on the upper surfaces. "2" is a stone detached from a pitted rock that became isolated from the rock by a soil layer. Wetted by dew on many occasions, it became populated by endolithic lichens. This pair is testimony for microclimatic changes. 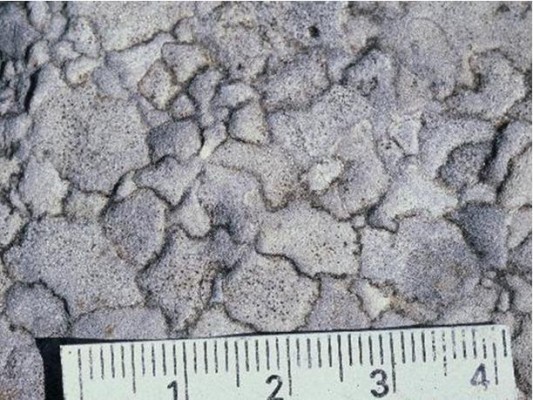 Fig. 6.7.8: The surface of a hard dolomite rock in Jerusalem, populated by thalli of endolithic lichens that resemble each other. The black dots are mainly fruiting bodies of the lichens.

I learnt from the PhD thesis of Etti Kushnir that the lichen causing the jigsaw puzzle-like pattern on stones in the Negev Highlands, grow on rock outcrops in Jerusalem, where they enjoy rain-water only. We carried out several 24-hour measurement events in the Negev Highlands and in Jerusalem, to study the dew and temperature regimes of stones and rocks. This research was done in cooperation with Prof. J. Garty and his students. The general conclusion is that the successful growth of Caloplaca alociza in the Negev Highlands (Fig. 6.7.5) and in Jerusalem (Fig. 6.7.8) is possible because of rainfall and dew contribution in both places. The optimal growth time during daylight hours is similar in both areas. Detailed studies of this subject have not yet been carried out (as far as I know).
לחלק הבא