Hard limestone and dolomite in nature

The weathering of hard limestone in the desert as compared to its weathering in Jerusalem compelled me to study the phenomena dealt with in this extended chapter. When I started work in 1963 in the Department of Geobotany at the Negev Institute for Arid Zone Research, our first task was mapping the Negev vegetation. Following a few reconnaissance excursions, we concluded that hard limestone and dolomite rocks, when in north-facing slopes, are populated by special plants. Examples were: narcissus near Dimona (Fig. 6.6.1) and Sternbergia (Fig. 6.6.2) near Yerokham. Both are growing in soil pockets in outcrops of smooth-faced hard rocks. At more advanced stages of the verification it became clear that the rock outcrops covered with epilithic lichens (1) are relatively smooth.

When rain falls, run-off water starts to flow very soon. After further observation (Figs. 6.6.2, 6.6.3) it became clear that organismic activity was involved here. The basic hypothesis was that in a site covered with epilithic lichen (Fig. 6.1.9), direct contact between the rain water drops and the rock is prevented. Each drop of water has to pass through the lichen before reaching the rock. As long as it is epilithic lichen the impact is identical. Thus, rock surface totally covered by epilithic lichens becomes smooth even if there are patches of soft rocks that are ready for fast weathering.

A very local situation is displayed in Fig. 6.6.3 where the part of the dolomite rock facing north is smooth, whereas the part of the same rock facing south is pitted. When visiting the rocky region of my childhood in Jerusalem, I checked the dolomite rocks near Bet-HaKerem (there were once such rocks in the area between Bet HaKerem and Shaarei-Tzedek Hospital, that is now totally built up). The north-facing side was smooth, as in the Negev, but the south-facing side of the rock blocks looked like a jigsaw puzzle (Fig. 6.7.5). Later I used these three weathering patterns – smooth, pitted, and jigsaw puzzle-like patterns, to divide the country into bioclimatic zones and to reconstruct climatic changes in the past. 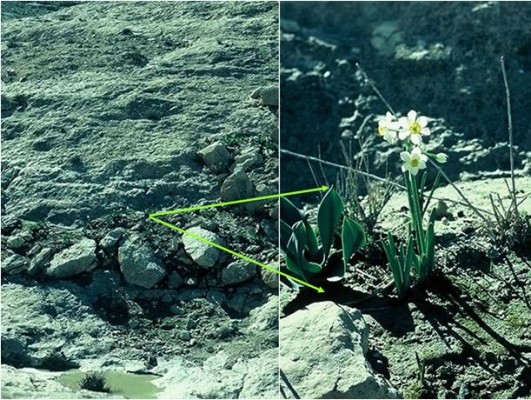 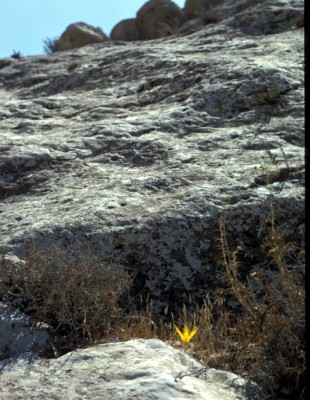 Fig. 6.6.2: Sternbergia clusiana in a soil pocket in the Rakhama Range at the foot of a rock outcrop where epilithic lichens aid in protecting the rock from weathering. The rock remains smooth. 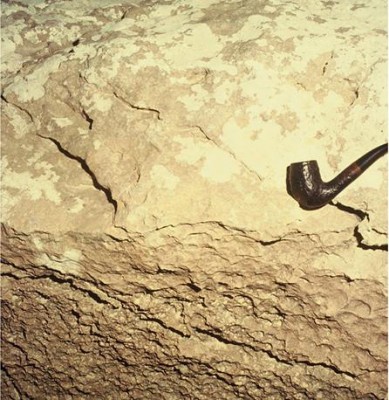 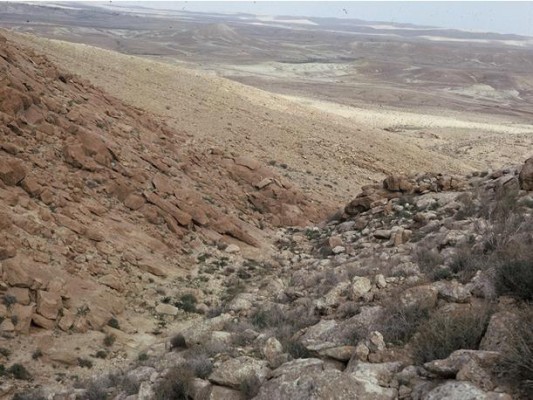 Fig. 6.6.4: Hard limestone and dolomite outcrops in the Rakhama Range near Yerokham, where the rocks and stones on the north-facing slope (right of the wadi) are covered with light-colored epilithic lichens. The south-facing slope is brown and populated with other microorganisms.

While epilithic lichens cover the north-facing side of the rock (Figs. 6.6.3, 6.6.4), the south-facing slope, known to be drier in our latitudes, is pitted. What is the meaning or significance of the pitting?! Fig. 6.6.5, photographed near the Dead Sea, south of Enot Zukim ('Ain Fashkha’) displays a high, white surface with pits that join here and there to form a channel. There are places where a white line is seen in the dark-colored channel floor. This is a "vein" in the rock where the organisms started populating the rock. Enlarging the scene area by Scanning Electron Microscope (SEM) shows (Fig. 6.6.6) that even the higher and white surface is sparsely populated by organisms situated in minute craters. Enlarging such a crater (Fig. 6.6.7) displays the thali (body) of the fungi of the genus Lichenothelia. Each thali dissolved the rock near it and the fungus is therefore in a depression. This species propagates by spores (Fig. 6.6.8), but also by branches with a swollen tip. In a similar rock surface near Sede Boqer another species of Lichenothelia (Fig. 6.6.9) has minute balls on the surface of its thallus; they might function in propagation as well. 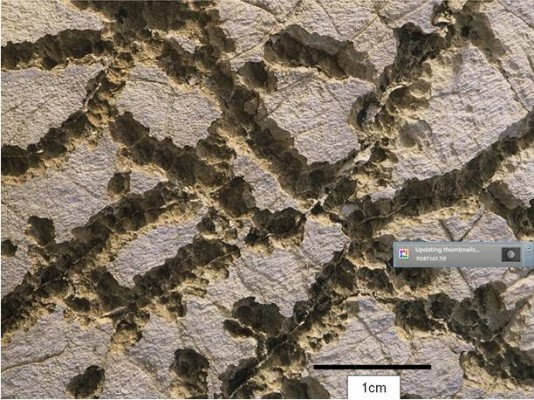 Fig. 6.6.5: Hard limestone above Horvat Medin, the Dead Sea coastal area, becomes populated with cyanobacteria and cyanophilous lichens in the pits that were formed mainly along lines of weakness in the rock. The weathering rate inside the pit is several times faster than that of the higher surface. 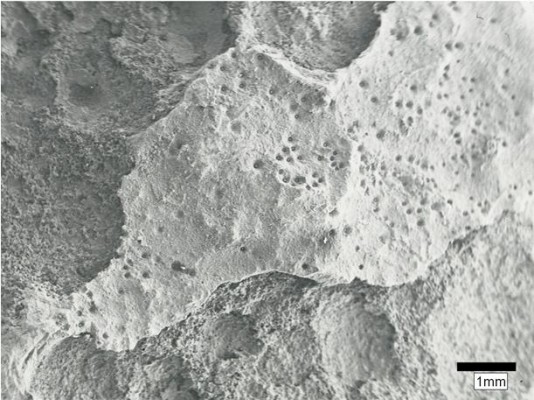 Fig. 6.6.6: Scanning Electron Micrograph (SEM) of a rock from the area of Fig. 345. The higher surface is populated with the fungus Lichenothelia that dissolves minute funnel-shaped holes in the rock. The granulous appearance of the lower surface derives from the releasing of free grains that is in turn influenced by microbial activity. 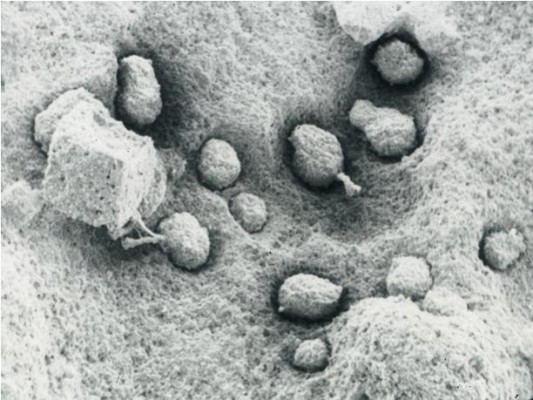 Fig. 6.6.7: The fungus thallus (0.2 mm diameter) oval, globular or pear-shaped, with lateral buds on minute branches. The thallus of each individual leads to dissolution of a depression in its shape at the rock surface. 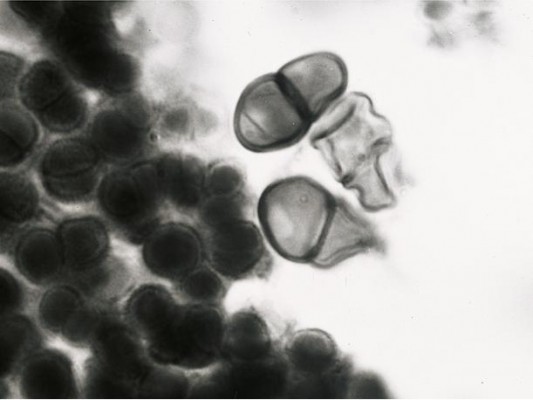 Fig. 6.6.8: Microscopic view of two cell types of Lichenothelia – the small black ones are those forming the outer sac-like body; the pair of cells sharing a wall are spores. 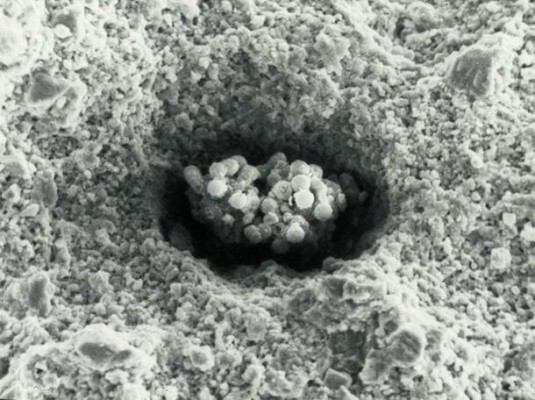 Fig. 6.6.9: A single thallus of another species of Lichenothelia in a rock from the Sde Boqer area. The fungus dissolved a small crater that includes its body. Propagation of this fungus is achieved by the small globular cells formed at the upper part of the thallus. 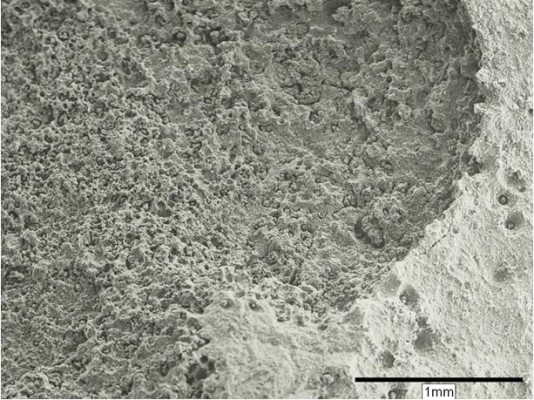 Fig. 6.6.10: A rock surface from that of Fig. 6.6.5, similar to that in Fig. 6.6.6. The surface looks like a sponge in the lower parts. The rate of rock deterioration at the lower surface, as induced by microbial activity (=biodeterioration), is fast. As a result, there is a steep wall at the boundary between the "spongy" landscape and that of the Lichenothelia. 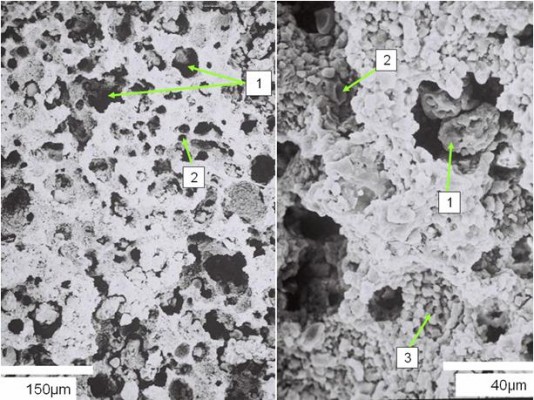 Fig. 6.6.11: Spongy rock surface where the results of microbial activity are prominent. The minute cavities in the spongy layer are a result of efficient dissolution of the rock by the organisms. The large irregular cavities ("1") are a result of the activity of cyanophilous lichens; the small regular cavities ("2") are the result of globular to ovoid cyanobacteria. Free rock crystals ("3"), derived from efficient dissolution when wetted, ready to be splattered out by rain drops.

The transition from the mini-landscape where Lichenothelia prevails, to the mini-landscape of cyanobacteria and cyanophilous lichen (mentioned in the walls of Jerusalem and the valley of Kidron), is sharp. Its significance is that the rate of weathering near the Lichenothelia is much slower (Fig. 6.6.11) and the holes in it contain: 1. Cyanophilous lichen, and 2. Non-lichenized cyanobacteria. As a result of the release of much CO2 into the water in the pitted area, the dissolving ability of the water in that area is high and many limestone crystals become free ("3" in Fig. 6.6.11) and ready to be splattered by the rain drops. Since the organisms where the weathering rate is faster, expand at a similar rate in all directions, the population looks circular and the oldest place is also the deepest – thus pits are formed.

These microorganisms are genuinely endolithic as they dissolve their way into the rock ("2" in Fig. 6.6.12). The organisms create holes in the rock and swell when wetted, which brings them into direct contact with the walls of the holes, accelerating their dissolving ("1" in Fig. 6.6.12). As the years pass, the pits become denser in all the area that is suitable for their growth. A rock from near Kfar Adumim (Fig. 6.6.13) displays a brown-red layer of chert that is not weathered by pitting; however, the limestone below it is densely pitted and occasionally influences the deterioration of the chert as well. 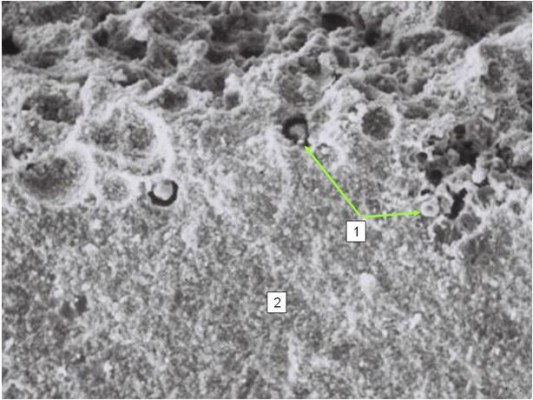 Fig. 6.6.12: A cross-section in the rock, perpendicular to a pit floor. The cells that formed the upper cavities are gone. The active cells ("1") swell when wetted and fill the cavity in the rock. The intact rock ("2") is rich in crystals. 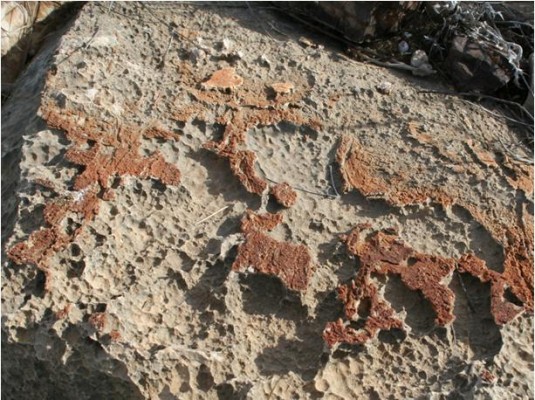 Fig. 6.6.13: Hard limestone covered by a layer rich in silica, which is barely influenced by lithobiont activity. The assemblage of cyanobacteria and cyanophilous lichens develop on the hard limestone and form their pits that progress slowly under the silica-rich layer and cause slow weathering there as well.