The Darkening of White Stone Walls

The house is built and the walls begin to "age"

In Jerusalem, houses have been built with limestone for thousands of years. When laid as part of the wall, the stones, cut from rock, were white (or pink – depending on the source rock). As the years passed, the stones became populated by organisms adapted to living in these harsh conditions, and the typical gray-black color of the walls became stable (Fig. 6.1.3). There are monuments in hard limestone in Jerusalem, such as the grave of "Pharaoh's Daughter," the grave of the offspring of Hizier, the Sanhedrin graves and the quarry for the Western Wall stones. These rocks do not absorb a large quantity of water and the rate of microorganism development on them is slow. Much time has passed since they were quarried and today they have "mature" colors that will be discussed later. 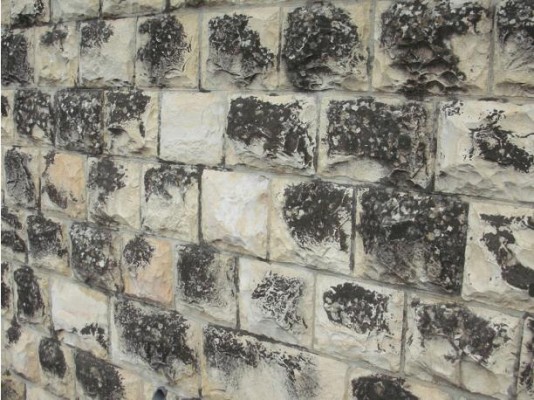 Fig. 6.2.1: A wall near Bet HaKerem, Jerusalem, built from stones made from soft rock and populated with dark microorganisms. 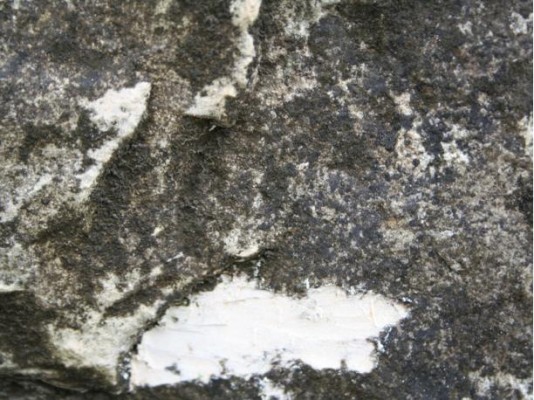 Fig. 6.2.2: The white rock is exposed below the microorganism crust.

We shall start by dealing with the process of the establishment of organisms on soft rock. The various stages of development may be seen more clearly in walls made of this rock. The first biological significance of the soft rock as a habitat is that it holds water available to the lithobionts for a longer time after wetting, as compared to hard rock. Therefore, the rate of biological inhabitation on soft rock is faster than that on hard rock. Let us take a wall constructed some 40-50 years ago from soft rock along the street descending from the flour-mill towards Bet HaKerem. The light colored wall stones (Fig. 6.2.1) have large black spots on them. When these dark epilithic organisms are scratched, white rock is revealed below (Figs. 6.2.2, 6.2.3). Following a rain shower, the black lithobionts become dark green-black. In many cases that I studied, the crust contained green organisms. I did not determine these organisms; they could be cyanobacteria, algae, or lichens.

Several stones on this wall and younger walls display the beginning of lithobiont establishment. Round circles of varying size are seen on the stone of Fig. 6.2.4. They explain the history of this location: the organism prevailing there started to develop in the center of each circle, grew and expanded at an equal rate in all directions. Upon closer viewing (Fig. 6.2.5), at least 4 types of organisms may be seen there. Later, the circle built by each individual increases up to the point of contact with the body (known as "thallus" – thalli) of the neighbouring lichen. Their lateral growth ceases at their meeting point. As the years pass, endolithic lichens establish themselves on many stones in the wall (Fig. 6.2.6). They are recognized by their gray color and the many small holes formed by their fruiting bodies. 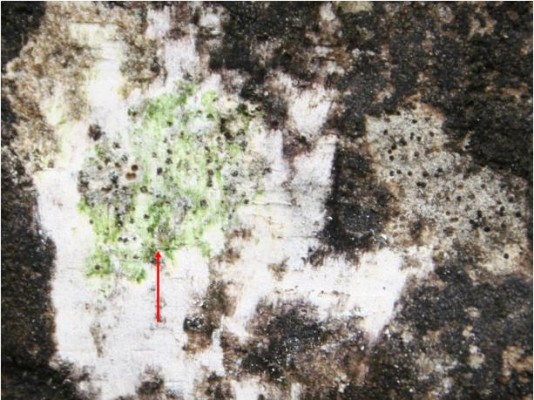 Fig. 6.2.3: Endolithic lichen following the removal of the upper rock layer on the left side. The intact thallus is gray and has black dots. 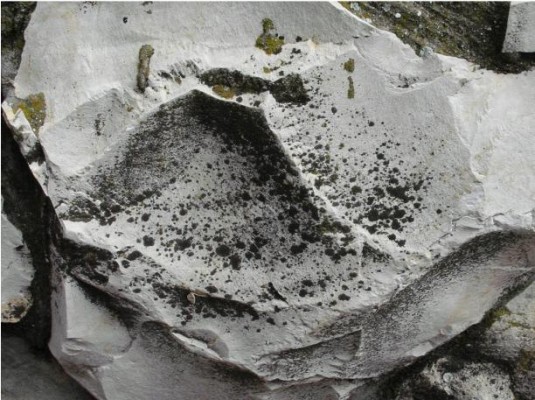 Fig. 6.2.4: Dark microorganisms start to develop and look like round patches that increase in diameter as they grow. 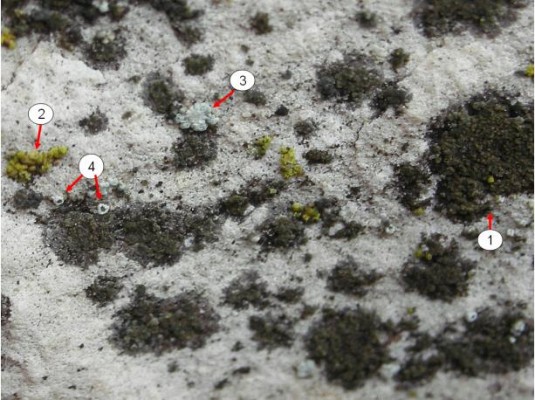 Fig. 6.2.5: 1. Black-green bulks of cyanobacteria or cyanophilous lichens (where fungi and cyanobacterium live in symbiosis and form a lichen). 2. A green- yellow lichen. 3. A green-white lichen. 4. A lichen displaying a few isolated round fruiting bodies: margin white and center dark. 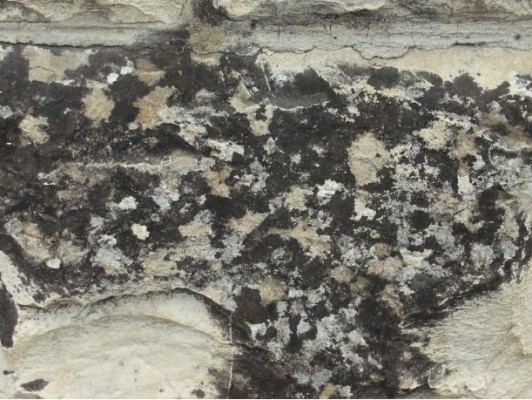 Fig. 6.2.6: Gray patches of endolithic lichens that displaced the dark organisms that first populated the rock. 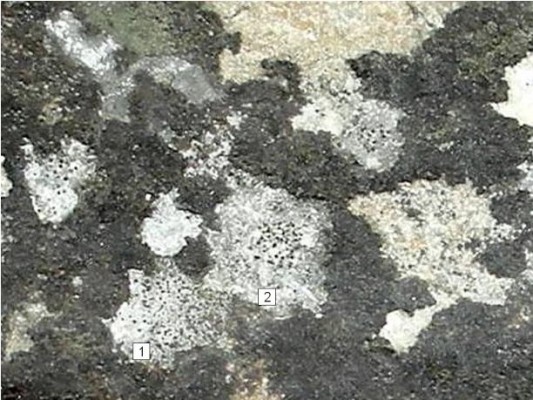 Let us consider, for explanation purposes, the drawing in Fig. 6.1.8 as located inside the rock, and its upper part, the crust, situated at the rock surface. The tip of the fungal hyphae (thread-like components) are exposed to the sun and develop dark pigments which protect the lichen from dangerous solar radiation. These dark dots together with the white crystals of the rock make the gray color of the endolithic lichen. When the gray surface is scratched with a knife, layer 1 of Fig. 6.1.8 is removed and the green algal layer is reached. Hence the left endolithic lichen in Fig. 303 is seen as green whereas the intact right one looks gray. When an endolithic lichen develops in the upper millimeter of the rock it causes the growth of the epilithic lichen above it to stop. 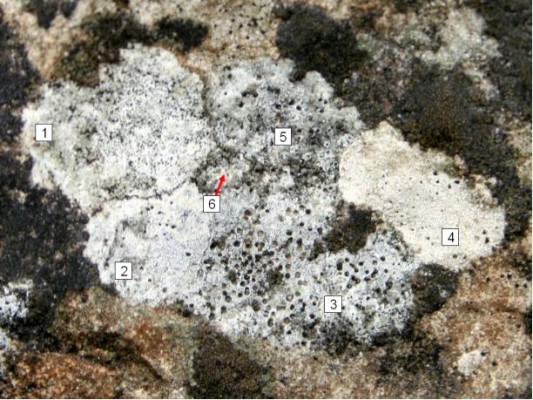 Fig. 6.2.8: When the endolithic lichens numbered 1 through 6, lichen No. 3 seems to have the densest dark dots of fruiting bodies. 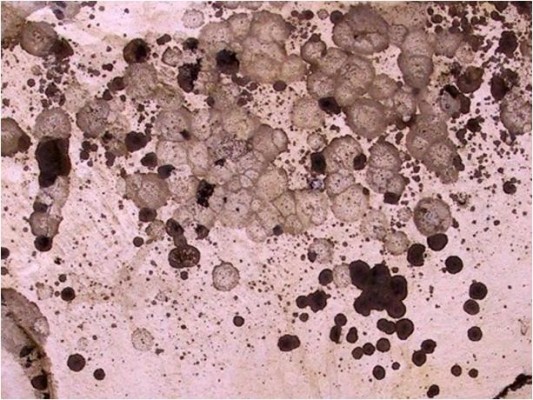 Fig. 6.2.9: Stone surface where mostly endolithic lichens met together in the upper part. Some of the neighboring lichens look like a jigsaw puzzle.

Among other features, the endolithic lichen is recognized by the presence of many dark dots (Fig. 6.2.8: lichen 3). In order to explain the structure of endolithic lichen and its role in biogenic weathering (Fig. 6.2.10), we dissolved the upper rock layer with hydrochloric acid. It was then scanned with SEM. The fruiting body is present in the hole at the lower right quarter.
The chemical activity of the fruiting body causes the rock to dissolve, leaving the organism's shape. The threads seen in the photo are those of the fungal component of the lichen and the larger bodies are the cells of the algae that give the green color in Fig. 6.2.7. When the organic matter in the depression decomposes, a depression remains in the site for many years. We are going to use later holes like those in Fig. 6.2.11, to prove that the origin of the Terra Rossa soil is in air-borne dust. 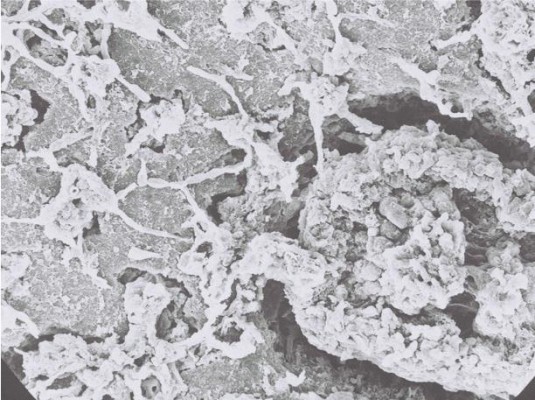 Fig. 6.2.10: Endolithic lichen after the stone layer at the surface was dissolved by hydrochloric acid. A fruiting body fills the depression on the right; the threads are fungal cells; the blocks connected by the fungi are those of the green algae. 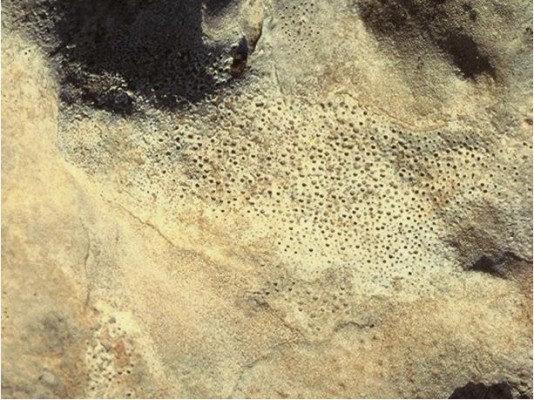 Fig. 6.2.11: A concentration of minute pits in hard limestone. This indicates that the stone was exposed to the sun in the past and became covered with soil where the lichen material decomposed.