The Biodeterioration of Colona Trajana, Rome

In 1988, in my lecture at an international meeting near Rome, I presented patterns of weathering and ecological factors influencing their distribution in the Negev Desert. I was then asked by my colleagues, who studied marble weathering in Rome, to "have a look" and compare. Interesting similarities were found. Trajanus Caesar was fighting in Europe and Asia and in 113 C.E. erected a triumphal column of Carara marble, to commemorate his conquest of Dacia (today within the boundaries of Rumania, Fig. 6.12.1). Microorganisms that settled on the marble facilitated and promoted their weathering. The scaffolding erected around the column in the 1980's for restoration facilitated our studies in 1990 (Fig. 6.12.2).

It was hard to object to the smiles of the women from Rome who were studying the biodeterioration, ecology, and weathering patterns of the monument. We therefore started to study these aspects of Colona Trajana together (Fig. 6.12.3). Our first goal was to understand the factors affecting the formation of holes in the relief carved by artists in marble almost 2000 years ago (Figs. 6.12.4-6.12.5). On the first day I visited there, Prof. Giulia Caneva (at the center of Fig. 6.12.3) suggested comparing the marble and desert weathering patterns. We walked up the scaffolding and I was impressed that in every circuit we passed, there were plenty of holes on one half and only a few in the other half of the column.

When we arrived at the highest position that had been reached at that time, I asked Giulia from which direction the strong winds blow when there is rain in Rome. When she pointed out the direction, it coincided with the direction of the dense pits on the Colona Trajana. I then took a chance and said to her and the rest of the group: if my theory is correct, there are no pits at all on the opposite side of the column. Giulia went and checked (while the pace of my heartbeats increased gradually), and returned with an answer that verified my guess. My hypothesis was based on my findings in the Mausoleum of Adugdi el Kabkabi (Figs. 6.4.3-6.4.15) in Jerusalem. While waiting for the airplane at Fiumicino airport I started to write the article that was published later: Danin, A. and Caneva, G. 1990. Deterioration of limestone walls in Jerusalem and marble monuments in Rome caused by cyanobacteria and cyanophilous lichens. Biodeterioration International 26: 397-417. 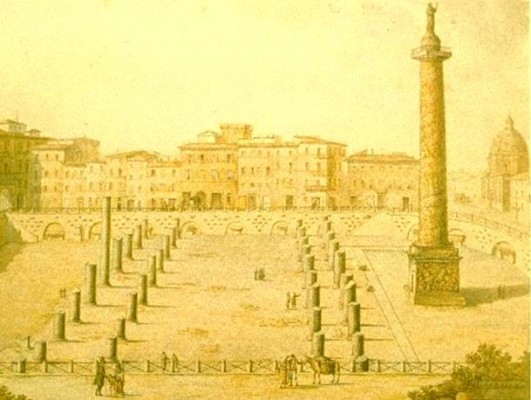 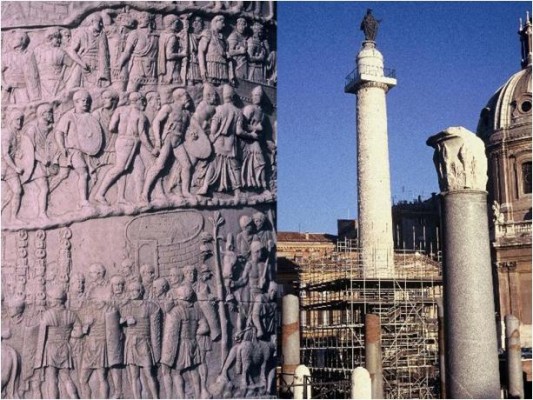 Fig. 6.12.2: Forum Trajanum, on the right: the column with scaffolding erected around it for cleaning and reconstruction activities. On the left, the Roman legions are depicted in a rich relief over the spiral around the column, 29.75 m tall and 3 m in diameter at its base. 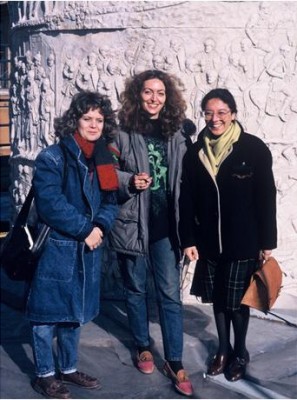 In the title of our article "Jerusalem" and "Rome" I was very proud to see my home town listed first as the source of information. On a visit to the cemetery of Kinneret, beside the grave of Moshe Hess, who wrote the famous book "Rome and Jerusalem" (and this is carved on the tombstone), I was reminded of fragments of knowledge from High School. Our study in Rome continued through several visits. We found significant statistical correlation between pits density and direction. There is also good correlation between pit diameter and depth, which fits our theory of pit formation by cyanobacteria. Several forms or patterns of weathering are displayed in Fig. 6.12.4 and 6.12.5.

The main problem we had was that the bacteriologist working with us, and earlier investigators in the past, did not find any microorganisms or other microhabitats in the pits. We had arguments with experts in various fields, and it seems that our conclusion was corroborated by the photos in the album displaying the history of the column. The right half, in Fig. 6.12.6 and its close-up in Fig. 6.12.7, shows patches of black that are prominent on the soldiers' feet at the lower part of the photo and in the folds of their clothing. We have seen all along the biodeterioration path, of which we are now in the last chapter, that organisms living in rock and stone surfaces produce dark pigments. What caused the monument to look so white even before being cleaned?

There were two photos, in which in place of Colona Trajana there was a kind of thick chimney, with an outer layer of red bricks. I asked the treasurer of the collection why they mixed photos of chimneys with those of the column. During World War II, the column was protected from bomb damage by covering it with sand bags that were held in place by the bricks. Covering the microorganisms, that demand high solar radiation, with sand bags, for 5 years, killed all the organisms, and their organic remnants rotted and disappeared. In Jerusalem, populating limestone walls by microorganisms takes more than 100 years. In Rome, not enough time has passed, and the marble is not yet populated by organisms. Changes in the microclimatic conditions in urban Rome may even increase the time needed for re-establishment of the microorganisms. 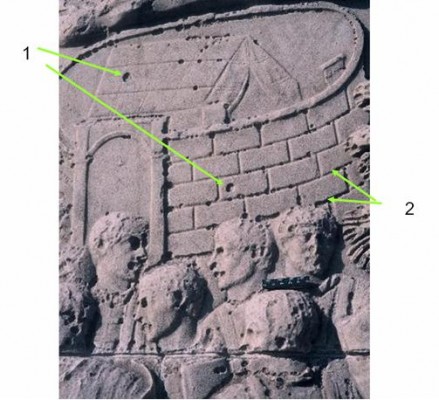 Fig. 6.12.4: 1. Deep, symmetric pits in elevated surfaces, possibly formed by cyanobacteria. 2. Meeting of pits formed along depressions in the relief on Colona Trajana. 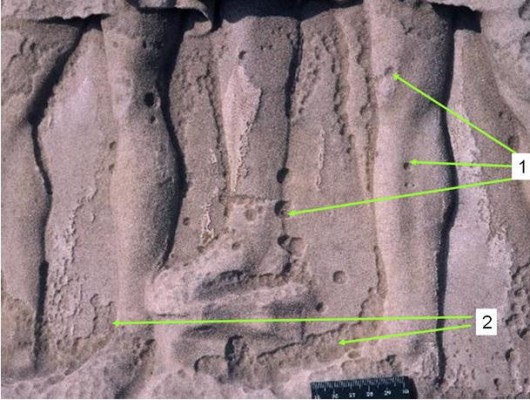 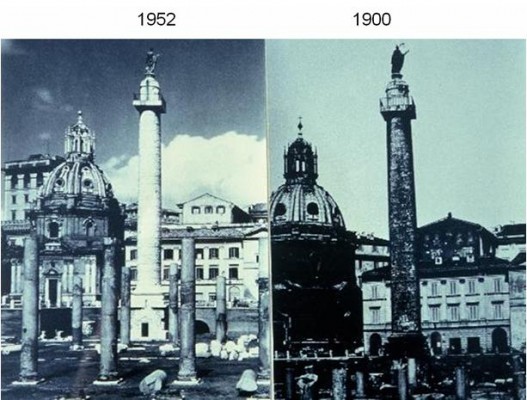 Fig. 6.12.6: A general view of Colona Trajana in a photo from 1900 (the photo on the right) and in a photo from 1952. During World War II the column was covered by sand-bags for protection from bombing. During these 5 years of being covered, the dark pigmented light-demanding organisms died and the marble again became white. 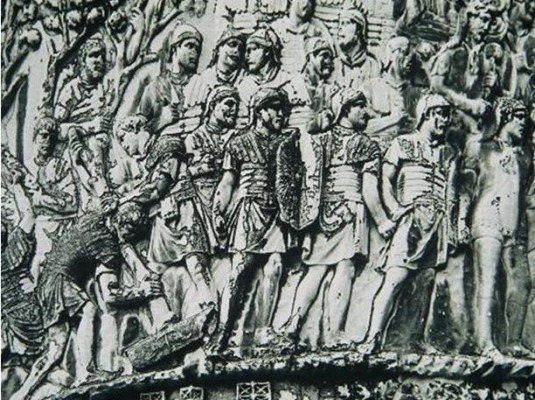 There were long arguments in the research team about the question of whether the pits are really a product of a biological process; we searched for sites with active organisms on marble in Rome. Forum Trajanum is the landscape displayed in Figs. 6.12.1 and 6.12.8. This area was studied by archaeologists (Fig. 6.12.8) some 130 years ago. We found in this site a marble column (marked with a green arrow in Fig. 6.12.8) on which there were the beginnings of a few pits ("1" in Fig. 6.12.9).

The cyanobacteria started to develop at the spot's center (Fig. 6.12.10). In a homogeneous environment, the rate of lateral expansion is identical in all directions and the resulting patch is circular. The lowermost place in this patch is the place where the time of biogenic weathering was the largest – the black patch center (Fig. 6.12.9). The cyanobacteria live among the marble crystals, and their life activities cause the bonds of the crystals with the rest of the marble to weaken. The raindrops easily splash-off the free crystals; hence the rate of weathering near the cyanobacteria increases and pits are formed (Figs. 6.12.10-6.12.11).

The source of rocks used for constructing Colona Trajana was the marble quarries in Carara (Fig. 6.12.12). Cutting marble there has been continuous from ancient times up to the present day. In our excursion there I found a natural marble rock with active biogenic weathering. Two pits at the higher surface and a lower area induced by microbial activity are prominent in Fig. 6.12.13. The dark organisms continue their activity (Fig. 6.12.13). 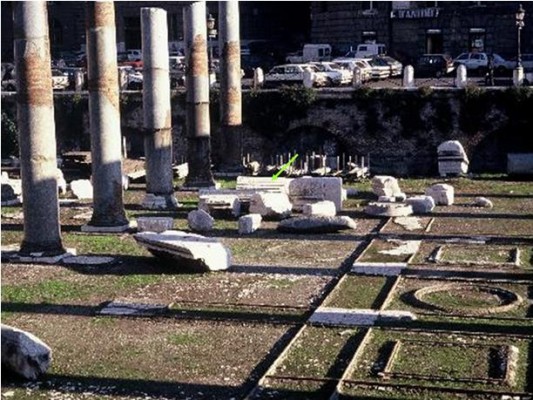 Fig. 6.12.8: Forum Trajanum where the green arrow marks the column that was used for cyanobacteria research. 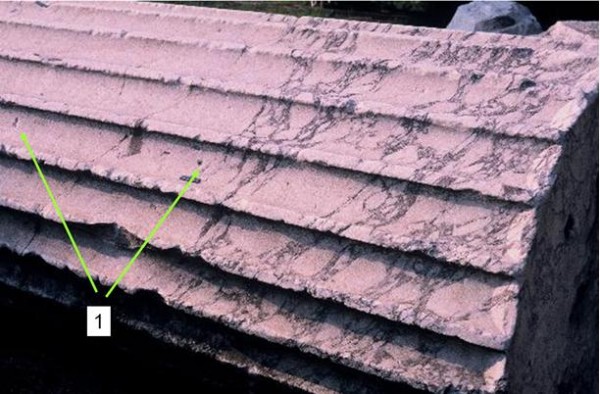 Fig. 6.12.9: Two pits developing as a result of cyanobacteria growing on marble exposed for 100 years. 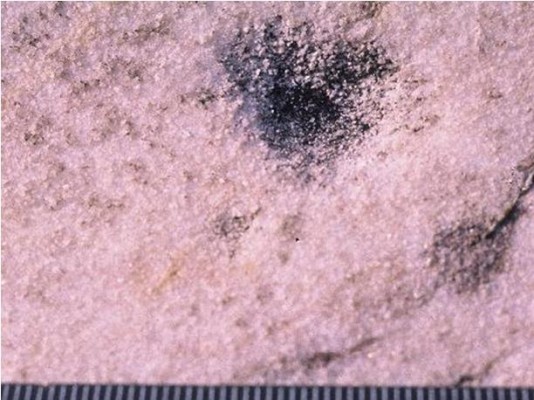 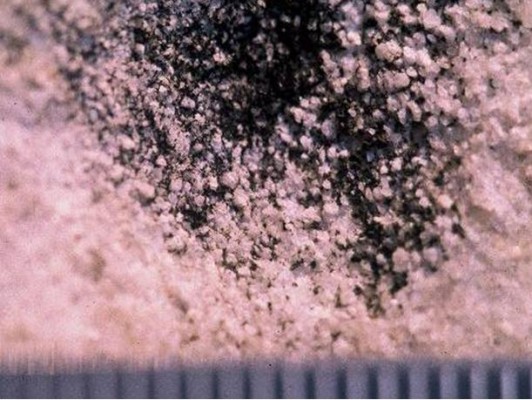 Fig. 6.12.11: A black spot in a marble block where cyanobacteria activity brings about weakening of the bonds between calcite crystals and the marble, leading to pit formation. 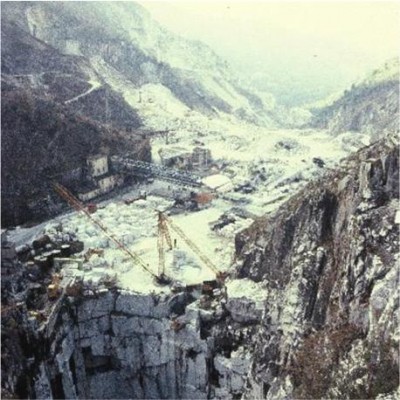 Fig. 6.12.12: The Carara quarries have supplied excellent marble for thousands of years. 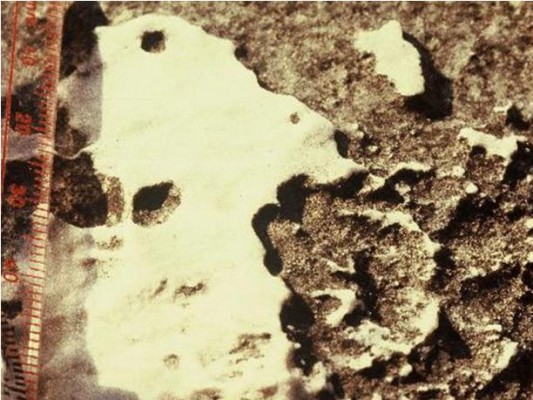 Fig. 6.12.13: Surface of natural marble rock in Carara near the quarries. The weathering patterns resemble those of pits in the Israeli desert.