I loved the words of a soldier who met us several months after attending our "field education" day: "The magicians have arrived." He was evidently referring to the lessons in lighting a fire without matches, making cords from fibers of wild plants and mattresses from shrubs and grasses. Eventually, I realized that several natural phenomena, although clear to me, seemed like magic to the viewer, and I was happy to show them to others. One of the first on the list is the chasmoendolithic cyanobacteria. To recall it, please refer to Fig. 6.1.6 "2" where one can see that the organisms are living in fissures (=chasm) inside (=endo) the rock ( =lithos).

This is directly linked to what is displayed in Figs. 6.1.13, 6.1.14, and 6.10.1. Fissures and the organisms living in them are at a 90o angle to their position in Fig. 6.1.6, e.g. in a tangential position to the surface and not perpendicular. Let us first examine the nature of exfoliation (Fig. 6.10.1), and then its role in shaping the desert landscape.

Exfoliation is a process by which "leaves" (=folia) of rock detach from the intact rock and fall out (=ex). Many participants in excursions I have led, had the opportunity to stand by a dry rock in the desert, and hear me promise that I'll soon present a "miracle" of blue-green algae (cyanobacteria) hidden inside the rock. The promise was always made near a rock where I saw exfoliation that looked like Fig. 6.1.13. Their surprise is accompanied on most occasions by a scream like "wow," when the rock "leaf" in Fig. 6.1.13 is lifted and turned upside down. It then displays the green film of cyanobacteria seen in Fig. 6.1.14.

As the years passed, I came very close to being 100% correct in forecasting the situation in Fig. 6.1.14. I therefore present it here as a recommendation to guides taking people into the field in Israel or in any other place on earth. My friend Prof. J. Garty used to relate, as part of his lecture on Antarctica, how he asked the American helicopter pilots who were about to take off from Antarctica, for "timeout". What do you need this timeout for? They asked; "blue-green algae" was the response. He went to a granite rock and tapped on it with a geological hammer, until he heard the special echo typical of a site with exfoliation (as we learnt on our mutual excursions). He then took samples and returned to the helicopter with small rock "leaves"; each one was green inside. The pilots told him that they have seen many kinds of researchers, but he is the first one who proved to them that he can "hear colors". Exfoliation occurs not only in limestone and dolomite but also in hard granite, other magmatic rocks (Fig. 6.10.2) and certain metamorphic rocks. 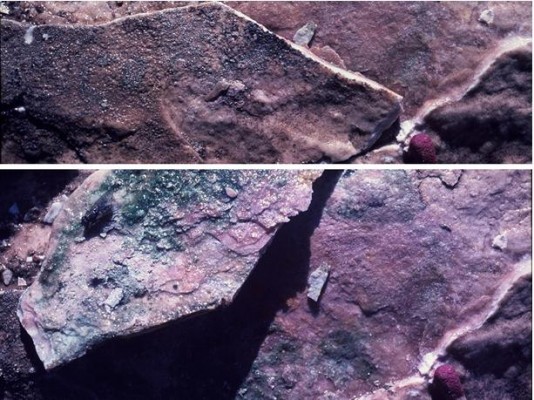 Fig. 6.10.1: A thin rock "leaf" in its natural state (upper half) after wetting. When lifted and turned over, the green layer of cyanobacteria (blue-green algae) living inside the rock, is revealed. 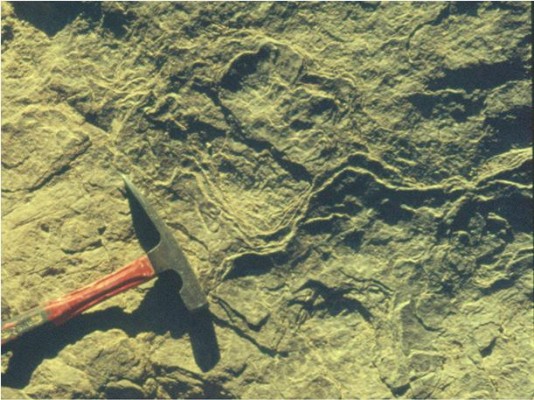 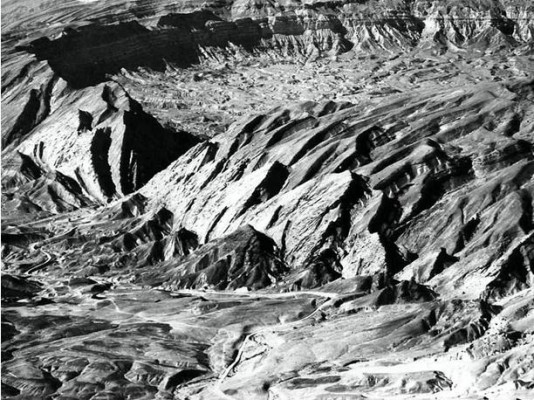 Fig. 6.10.3: An aerial view of Machtesh Hazera (the Small Crater). The glittering layer-triangles, near the black ones of Mishash formation, are of Shivta formation weathered by exfoliation.

After observing a green layer under red granite "leaves" in Jebel Serbal and other beautiful granite peaks in S. Sinai, I am sure that the observer will be able to see blue-green algae in granite outcrops of exfoliation in the famous formations of Yosemite, California. When I was with a group of tourists in the "Sacred Valley" (Uribamba Valley, in the Andes, near Kusko, Peru), I wanted to show them the harmful activity of cyanobacteria in one of the Inca shrines. A few German tourists screamed at me as if I was the one destroying the stones and not the chasmoendolithic cyanobacteria. Good health to them.

A question that is often asked by people seeing these green layers hidden inside the rock: how do the cyanobacteria get the light needed for photosynthesi? The answer to that was given to me by Prof. Bloch, "the brain" behind many physical processes used in the Dead Sea Works in the production of potassium. He suggested that when the rock is wetted by rain, systems similar to optic glass fibers are formed in fine spaces among solid parts of the rock. The capillaries fill with water and conduct light rays from the rock surface down into the depths of the fissure. I remember him saying "As the rock becomes wet, water plus light penetrate together."

A friend, who studied light penetration into sandstone in Antarctica, concluded that the light conductivity of wet rock is 10 times higher than that of dry rock. The chasmoendolithic cyanobacteria photosynthesize, multiply, and change the volume they fill inside the rock according to the fluids present in their body. Each cell or a group of cells is subtended or covered by a layer of polysaccharides that swell and contract according to the status of their water content. As the organisms in the fissure multiply, the quantity of polysaccharides grows accordingly and the pressure towards the opening of the fissure increases. CaCO3 deposition close to the photosynthesizing organisms assists in holding the fissure open, thus promoting the exfoliation. 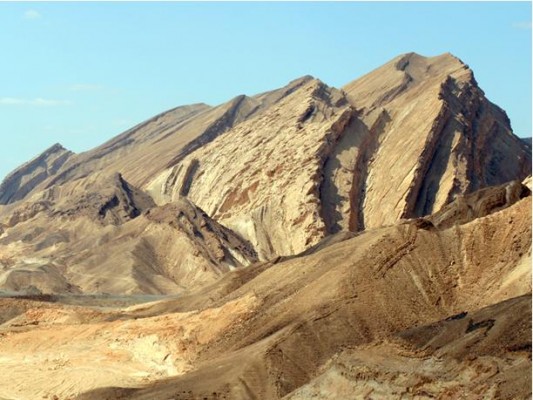 Fig. 6.10.4: Triangles of Shivta formation at the center of the photo. To the left of them are the black chert triangles of Mishash formation. 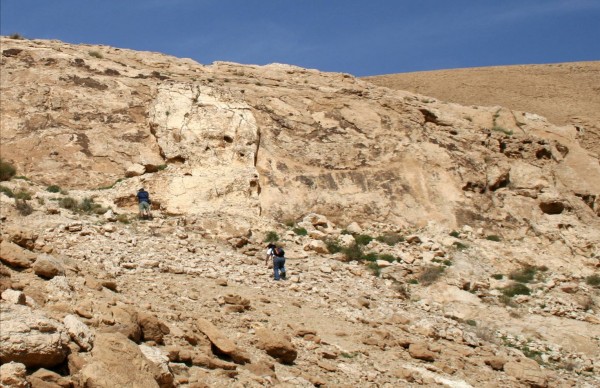 Exfoliation is a relatively marginal process in the construction of the desert landscape. In the areas where endolithic lichens populate the detached stones and make them gray with jigsaw puzzle-like patterns, exfoliation is found in relatively small patches. However, east and south of that area, in places where there is no jigsaw puzzle-like pattern on stones (the eastern flanks of Hazera and Hathira mountain ranges) the exfoliating cyanobacteria take a relatively important role in making up the landscape. An aerial photograph of the eastern flanks of Hazera Crater (Fig. 6.10.3) displays glittery triangles in both sides of the crater "mouth." These triangles are placed inside the black triangles of the chert and we therefore identify the "glittering triangles" with Shivta formation (Turonian).

In the moister part of the Negev, this hard limestone forms the smooth-faced limestone outcrops affected by the epilithic lichens (Fig. 6.6.1). Here in the east to south-east slopes where the glittering triangles occur, epilithic lichens do not develop. Due to the strong inclination of the limestone layers, the rock "leaves" created and detached by the chasmoendolithic cyanobacteria do not remain in the site. They are easily carried away down the steep slopes (Figs. 6.10.4-6.10.6), leaving smooth-faced rocks. When searching for rare plants in the desert, I went to places that were similar to the glittering triangles in Figs. 6.10.1 and 6.10.3, and discovered many surprising plants. 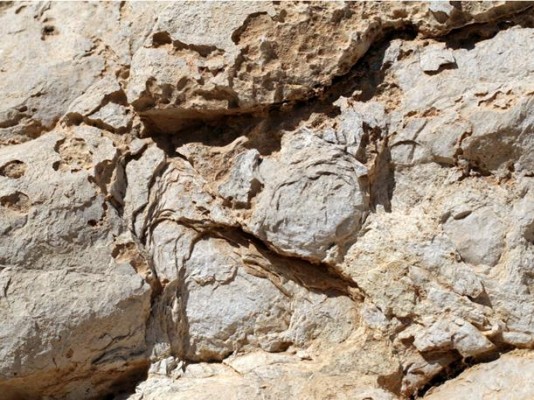 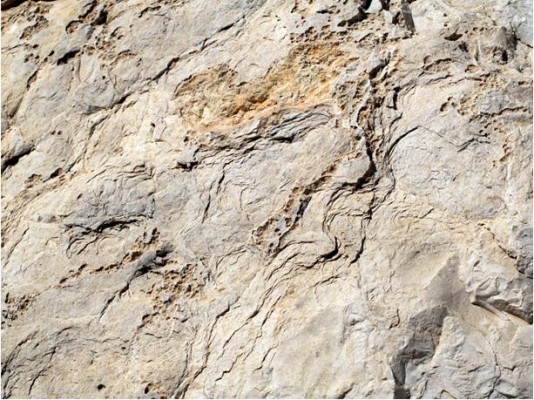 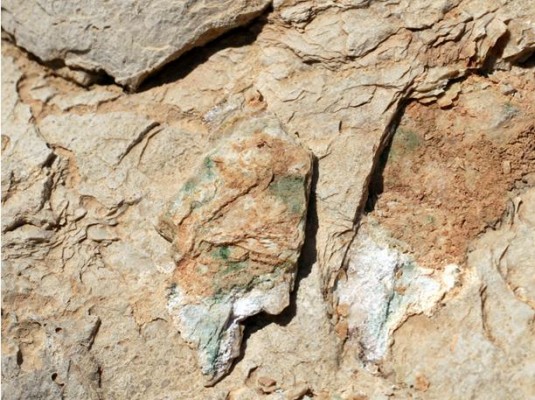 Fig. 6.10.8: A thin rock "leaf": after removal and turning over, it reveals the chasmoendolithic cyanobacteria that influence the whole process: Machtesh Hazera. 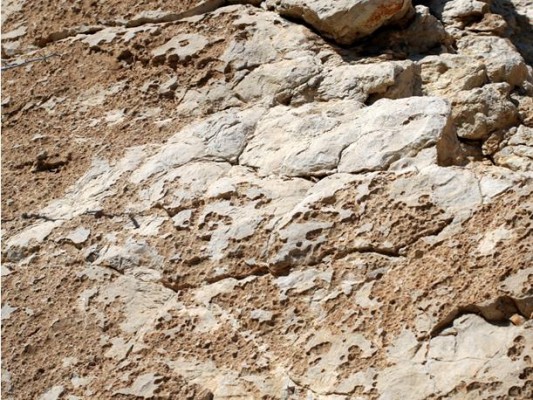